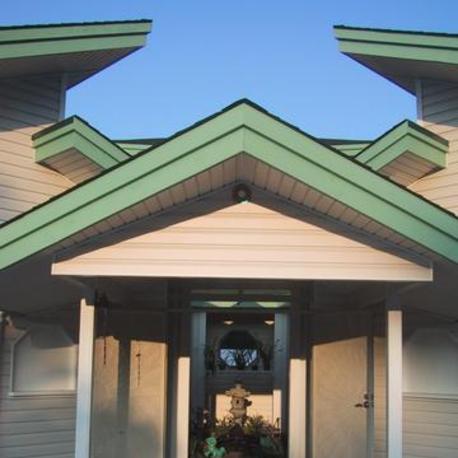 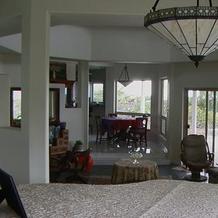 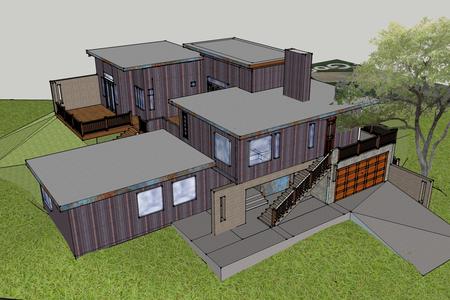 Residence has been reduced to 2268 sf by request of the Ginsberg's.  Most features of the original program remains however reduced in size.  The building has been modulated into two main cores, an upper, more public area, and the lower private bedroom area. The master bedroom suite and office is on the upper floor in it's own wing tucked off into the trees.  The building steps down to address the difficult diagonal cross-slope. The building has been turned to greet the site.  Only one tree will be removed to situate the house tucked within the existing landscape.  The building forms are drawn from local material selection, and coordinated with the invisible force of a tumbling stone.. Eaves have been staggered to accentuate the stratification of the rolling hills. 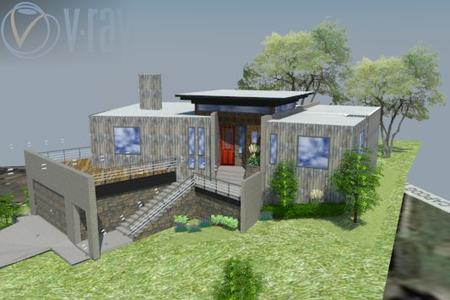 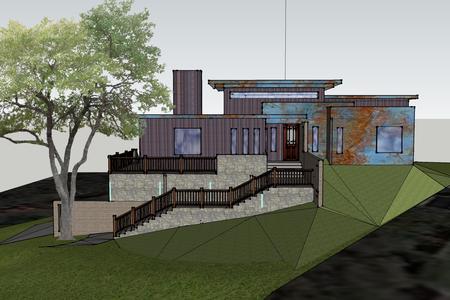 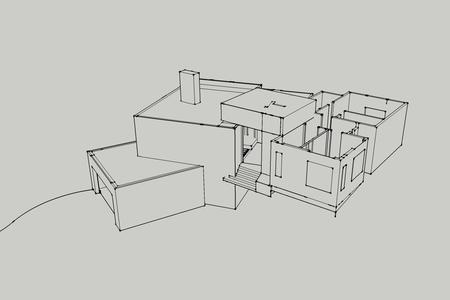 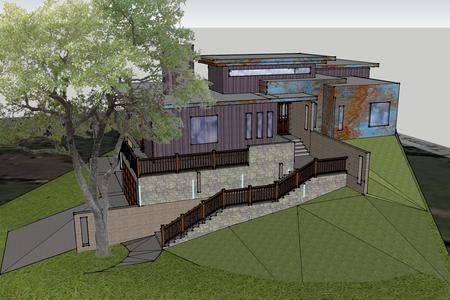 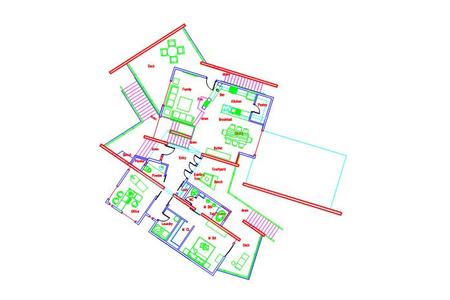 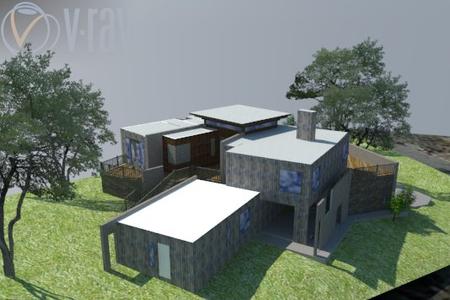 The Ginsberg Residence will sit on a wooded cross-sloped lot on the southeast end of Austin.  The lot has partial views to the north towards the city. The house is small, only 2100 s.f. is programmed space, which includes 3 bedrooms and an office, a living room, dining room and kitchen. A two-car garage will be tucked underneath the two main  cross-tube beams. The house steps along the hill with a drop of approximately ten feet across the site. The two tube-beams, actually stretched rooms which provide the structural support for the house., are the dominant forms upon the site.  Inexpensive building materials, such as plaster, local stone, repurposed siding, and flat Cortan panels.

Original design shown at 2800 s.f. is now in redesign. 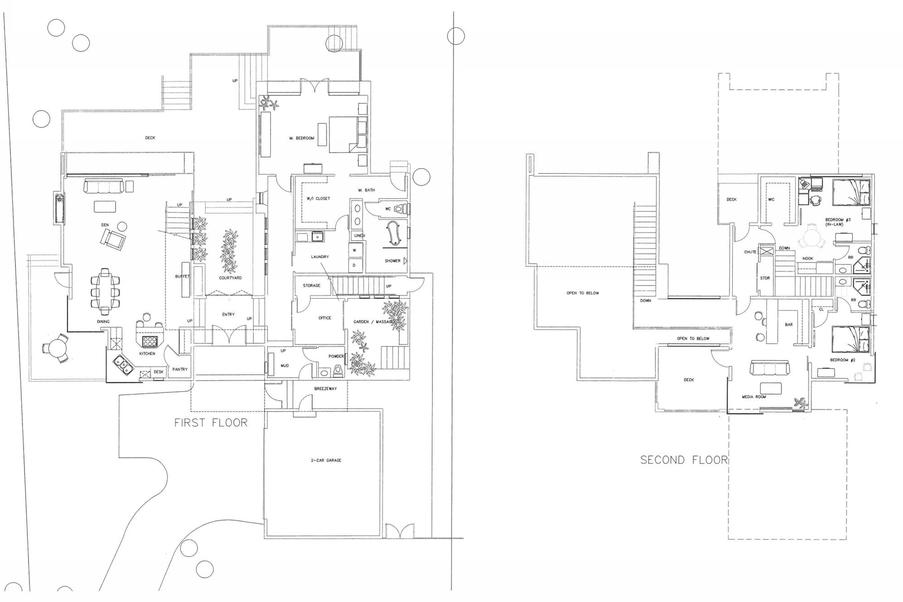 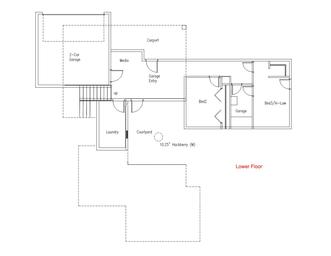 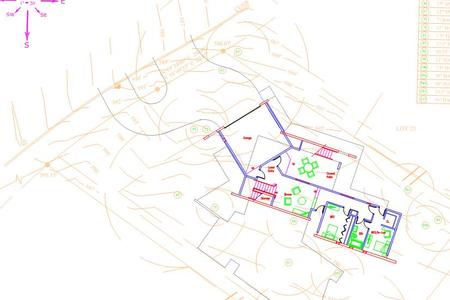 ​Residence has taken a turn for the surreal as the design evolves and the innate sense of tumbling is developed into the forms.  Stone and Cor-Ten, and board-formed concrete walls punctuate the space and accentuate the coolness of the material set against the soft natural warmth of the wood.  Here the design twists and unravels along a modified golden spiral as it steps down the hill while simultaneously projecting out over the landscape.  The main axes begin parallel to the setbacks on the upper side, and revolve around the central pivot, the large oak tree in the front yard, to which the garage becomes oriented towards the street.  Crossing and folding the axes change the dynamics of the space by fragmenting into public, semi-public, and private spaces. 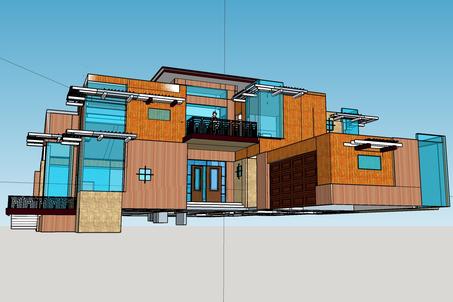 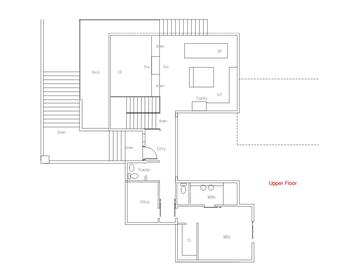 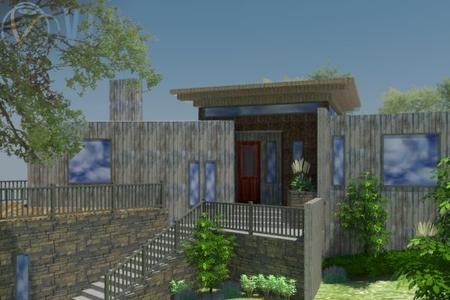 ​​"The quality that we call beauty, however, must always grow from the realities of life, and our ancestors, forced to live in dark rooms, presently came to discover beauty in shadows, ultimately to guide shadows towards beauty's ends."
- - Jun'chiro Tanizaki, In Praise of Shadows, p.18. 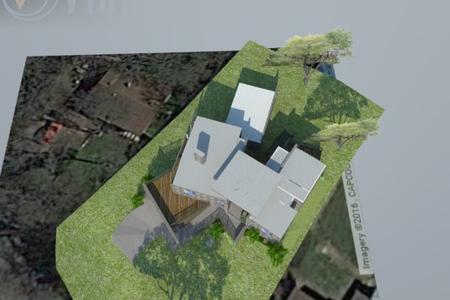 The Grafilo Residence is conceptually an experiment in dualities designed for a hypnotherapist and his technology oriented wife.  It's form is based upon the symmetrical unfolding of geometric shapes configured around two adjacent octagons (bagua) joined together as the unwinding of yin and yang: one exterior courtyard, of light and nature, the void, the unknown, feminine; one interior family room, of shadow and man, the solid, the known, masculine.  The remainder of the house manifests out of this infinite form. Sacred geometry establishes the pattern of unfolding like an origami bird perched on the edge of the cliff site looking out over the bay. 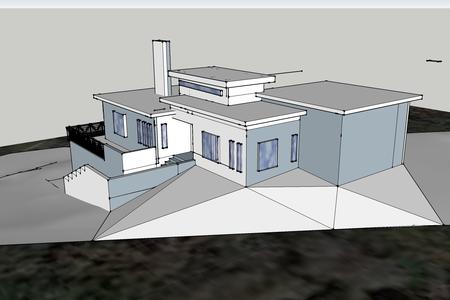 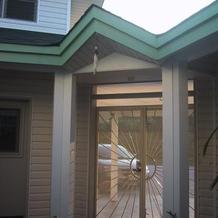